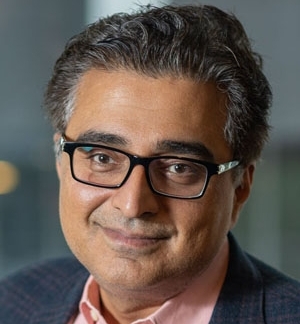 Dr Subodh Verma is an internationally renowned cardiac surgeon-scientist and Professor at the University of Toronto. He is the current Canada Research Chair in Cardiovascular Surgery, having previously served as the Canada Research Chair in Atherosclerosis (2007-2017). Dr Verma was awarded the Lister Prize in Surgery from the University of Toronto in 2021 in recognition of his outstanding and continuing productivity of international stature. He is a past recipient of the Howard Morgan Award for Distinguished Achievements in Cardiovascular Research from the International Academy of Cardiovascular Sciences and the Royal College of Physicians and Surgeons of Canada Gold Medal in Surgery. Dr Verma is an appointee of the American Association of Thoracic Surgeons (AATS) and a member of the Royal Society of Canada College of New Scholars, Artists and Scientists.

Dr Verma’s over 500 peer-reviewed publications have earned him a Google Scholar h-index of 108 with ~58,000 citations. He has published extensively in highly impactful journals like the NEJM, Lancet, Nature, Circulation, European Heart Journal and JACC. He is an Associate Editor of the European Heart Journal. Dr Verma is an active contributor to Canadian clinical practice guidelines and co-authored the recently updated recommendations for atrial fibrillation, antiplatelet therapy, diabetes, and heart failure; he was also a member of the 2018 AATS consensus guidelines committee on bicuspid aortic valverelated aortopathy. Dr Verma has served in various capacities on the American Heart Association Council on Cardiovascular Surgery and Anesthesia since 2008.

Dr Verma had/has leadership roles in multiple contemporary global heart failure trials – several of which persuaded guideline writing committees to recommend paradigm changes in how individuals who live with heart failure should be managed. He founded the CardioLink platform at St Michael’s Hospital that united cardiac surgeons from across Canada to conduct robust clinical trials to better inform on surgical decision-making pathways. CardioLink has since expanded its scope to include cardiometabolic studies.


Mark Petrie is Professor of Cardiology in the Institute of Cardiovascular and Medical Sciences at the University of Glasgow, and a cardiologist at Glasgow Royal Infirmary, UK.  Professor Petrie's has a high-volume clinical practice within a large heart failure team.  His research interests focus on diabetes and cardiovascular disease, intervention in heart failure, subcutaneous furosemide in heart failure, revascularisation in heart failure, peripartum cardiomyopathy, microvascular disease in heart failure with preserved ejection fraction, cardiac remodelling, iron in heart failure and cardio-oncology.  He has leadership roles in many trials including STICH, REVIVED, DAPA-HF, EMPACT-MI, STEP-HFpEF, REALIZE-K, IRONMAN, PARADISE-MI and has chaired or been a member of over 40 Clinical Events Committees for major trials.  Mark has published over 220 original publications, many in high impact factor journals such as NEJM, Lancet, JAMA, Circulation and JACC.